Compliant is not equal to Coachable: Employees who are obedient followers can actually be difficult to coach

It probably won't come as a surprise that some high-powered executives don't take criticism very well, or will scoff at 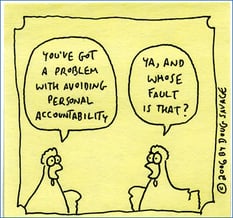 the idea of using a professional coach. But what if someone lower on the company hierarchy had the same attitude? How would you react if you had an assistant who follows your direct orders “to a T,” but who ignores your suggestions for improvement, dismisses your criticism, and who is immune to training and coaching?

Intuitively, it sounds like an oxymoron, but this pattern is more common than one would think, according to our latest research. Employees who indicate that they are more comfortable following than leading are actually the least amenable to coaching, compared to people in leadership positions, and those who are comfortable both leading and following.

Here are the results of the data we collected for our Coaching & Trainability Attitude Assessment (CTAA) (Note: Scores range from 0 to 100; a high score is considered ideal, with the exception of the Know-it-all-ism scale):

Openness to learning and improvement

Willingness to ask for help

Comfort with vulnerability and admitting weakness

It’s unlikely that most assistants or subordinates would openly defy criticism or downright refuse to be coached, but there may be a strong desire to do so. They may accept a manager’s criticism, or take courses/training if asked, but many of them do so grudgingly and with a total lack of interest in learning. Of course, with that kind of attitude, any investment into training or coaching is a waste of time and money.

On the other hand, numerous studies have shown that training and coaching have an amazing return on investment. That, however, applies to the right training for a receptive audience, people who will apply the suggestions and actively try to implement new insights into their work, behavior, and communication style.

So what can we take away from this study? You need to hire the right people from the very beginning. Hiring employees who are able to be a leader and follower will prove to be to your (and their) advantage: They have the best of both worlds, and most importantly, are open to learning, to improvement, to direction, and to feedback. Companies need employees with this degree of versatility.

If you’re interested in using CTAA (Coaching & Trainability Attitude Assessment) or other tests for HR purposes, request a free trial of ARCH Profile.