I can think of at least a handful of guys I’ve driven around with who refused to ask for directions when we were lost – and one female friend…although she saw it not so much as being lost as simply “discovering new places.”

Here’s how my trip down lost memory lane started. I was looking at data from our Coaching & Trainability Assessment (CTAA). The statistics indicate that women are much more coachable than men. 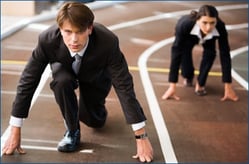 I'm not just talking about the relationship between athletes and coaches, or clients and life coaches. I’m referring to a general willingness to accept feedback, take direction, and strive for self-improvement.

The good news is that, in general, most people are quite open to being coached, trained or mentored. The bad news is that some people, when it gets right down to it, are unwilling to accept guidance – and according to our data, this applies to men in particular.

Here’s how men and women compared on our test:

Other differences between men and women…

During a performance review…

Is this a matter of pride? Ego? Not wanting to look weak or incapable? After broaching the subject with men of various ages and professions, these were their responses:

“Because men are egotistical and know-it-alls. They think they know everything. Women are much more responsive, especially if they don’t know what they’re doing, and show a willingness to get help.” Anthony, 25 years old

“Because men feel like they can do anything on their own without the help of a coach or anyone else. Just like if a wife asks her husband to call a plumber to fix the toilet – he’s most likely going to try fixing it himself before calling for help, just like getting directions and just like being coached. They feel powerless when they’re being coached; like they’re being molded into an image, or are inferior to the coach…which is why they tend to act out and say, ‘I know how to do it’ or ‘I know what I’m doing’. They don’t want to feel useless or inferior which makes them hard to coach because men are know-it-alls. We want to feel like we’re in control. We’re afraid of having our manhood taken away.” Dario, 24 years old

“When you study male and female athletes it comes down to hormones. Testosterone will have men less coachable by a coach they don’t respect. Women are more objective and open-minded to coaching due to a less confrontational and aggressive genetic makeup. It’s hunter/gatherer vs. nurturer. [In general, it’s] 70% genetic, 30% environment. Women genetically have the maternal, nurturing qualities that allow them to be better listeners and assimilate better in a group setting. And accept criticism better. Less ego, less alpha male [issues].” Chris, 39 years old

“Perhaps because traditionally men view a need for help (or improvement) as weakness. Same reason they don't like to ask for directions.” Tom, 54 years old

Here are some tips that can help make the coaching process much smoother: