How to coach, direct, and give feedback to “Alpha Males”

Our previous post brought to light research showing that female employees are more open to coaching, feedback, and direction than male employees. It now begs the question: How do you coach male employees who don’t want to be coached? 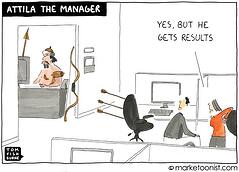 Researchers Kate Ludeman and Eddie Erlandson used the term “alpha males” to describe male employees who are not very amenable to feedback and direction. Aside from being “highly intelligent, confident, and successful, ”alpha males:

“…reach the top ranks in large organizations because they are natural leaders – comfortable with responsibility in a way non-alphas can never be. Most people feel stress when they have to make important decisions; alphas get stressed when tough decisions don’t rest in their capable hands. For them, being in charge delivers such a thrill, they willingly take on levels of responsibility most rational people would find overwhelming. In fact, it’s hard to imagine the modern corporation without alpha leaders. Then why do so many of them need executive coaches?”

The problem is that alpha males find it hard to ask for help. They take pride in the fact that they made it to the top as a result of their hard work and effort. And while you appreciate their tenacity, determination, resilience, and ability to get results, you also rue it as well. To put it simply, what makes an alpha male an asset can also make him a liability.

Taking criticism is hard. Being told that you need improvement is hard. For an alpha male to admit that he has any weaknesses puts him in a vulnerable position and makes him feel weak. If that wasn’t emasculating enough, coaching places an alpha in a situation where someone else is in control and telling him what to do.

What a coach needs to do is to help an alpha understand that the point of coaching isn’t to lay their faults bare but rather, enhance their existing strengths and turn limitations into strengths. In essence, coaching is like restoring an old painting: you must strip away the layers that hide the true masterpiece within.

Here are some tips for coaching alpha males in your organization: