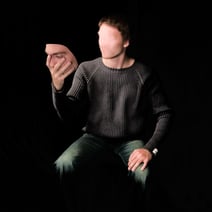 Despite being one of the greatest (if not the most celebrated) guitarists of all time, Jimi Hendrix never fully embraced his acclaim.

“I don't really live on compliments,” he mused during an interview on The Dick Cavett Show. “As a matter of fact, they have a way of distracting me. I know a whole lot of musicians, artists out there who [hear] the compliments and [think] ‘Wow, I must have been really great,’ and so they get fat and satisfied and they get lost and forget about their actual talent and start living in another world.”

Success changes people, sometimes to their own detriment. On one extreme you have those who, upon realizing a major achievement, get a little too caught up in the glory and become egotistical, condescending, and self-important. As Hendrix suggested, they lose sight of the fact that self-improvement and learning is a lifelong process.

On the other extreme we have the self-proclaimed impostors; people who feel that they don’t deserve success or the praise that comes with it, and for whom every achievement is tainted. Despite their past successes, they still see themselves as an impostor who will be found out eventually.

Who is more likely to struggle with this issue? This is what data from our Impostor Syndrome Test reveal:

Perhaps not surprisingly, as self-esteem decreases, the likelihood of developing Impostor Syndrome increases.

The less goal-oriented a person is, the higher the probability that he or she will develop Impostor Syndrome.

As the tendency toward perfectionism becomes more extreme, the propensity for Impostor Syndrome increases.

Impostor Syndrome tends to be higher among people who are dissatisfied with their job.

Individuals who have received poor performance reviews are more likely to struggle with Impostor Syndrome.

The PsychTests study found statistically significant differences in scores between different age groups, and different levels of socioeconomic status. While these differences are interesting and statistically robust, the margins are rather small. Essentially, the data show that the Impostor Syndrome is rather prevalent, albeit to a moderate degree, with older women from low socioeconomic class being most at risk.

Women are more likely than men to feel like an impostor, but both genders are prone to self-doubt.

Impostor Syndrome increases with age, but then drops after the age of 40.

As socioeconomic status decreases, the probability of suffering from Impostor Syndrome increases.

Despite having achieved success in the past, people with Impostor Syndrome refuse to take ownership of their successes. They diminish the significance of their achievements and attribute them to luck or other forces outside their control, rather than their own effort, dedication, and even intelligence. For people with Impostor Syndrome, the only thing more threatening than a seemingly undeserved achievement is the terror that one day, people will recognize them for who they feel they really are: A complete and utter fraud.

Given that Impostor Syndrome is indelibly linked with low self-esteem, here are some tips to help boost your self-image: .