Don’t hire employees with puppet strings: The importance of an internal locus of control 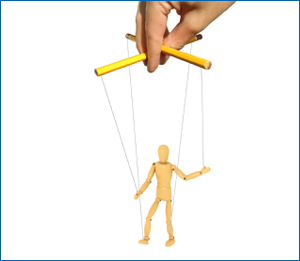 It was theologian Reinhold Niebuhr who is quoted as saying “God grant me the serenity to accept the things I cannot change; courage to change the things I can; and wisdom to know the difference.” There is more to this plea than a desire for serenity when faced with tumultuous times. Niebuhr’s quote hints at the idea of locus of control (LOC), the extent to which people believe they have control over circumstances and events in their life.

Those who have an “internal” LOC are more likely to feel that their actions make a difference. Rather than sitting idly by and letting things happen, they are proactive; they feel that they can change the course of their life based on the actions they take and the decisions they make. Those with an “external” LOC are more likely to feel like victims of life’s ups and downs. Their life, it seems, will always be at the mercy of outside forces (like destiny, luck – good or bad, or other uncontrollable factors), and there’s nothing they can do about it. This often leads to a passive, defeatist and, let’s face it, pretty grim view of life. As Homer Simpson put it (in a misguided and unsuccessful attempt to cheer up his children), “Kids, you tried your best and you failed miserably. The lesson is 'never try'.”

Research we conducted using LCAST (Locus of Control & Attribution Style Test) indicates that the majority of people feel that they do possess some degree of control over their life. While not all circumstances or events are within their power to change, most agreed that they are not hapless puppets in life’s dark drama. We also discovered that locus of control seems to be a function of age, with older age groups possessing a more internal LOC than their younger counterparts, particularly in terms of health, love, and the ability to overcome heredity and a difficult childhood. Older people were also less likely to believe in luck, destiny, or fate.

So why is this important? Because locus of control can have a significant impact on a person’s actions. Granted, there are some advantages to an external LOC, just like there are for pessimism … disappointment and failure aren’t so hard to swallow if a problem can be blamed on uncontrollable circumstances. However, people with an internal locus typically fare better in life. They own their successes and failures, and don’t sit back waiting for things to happen. They feel in control of their life, and go after what they want to achieve. They actively look for opportunities. They are more likely to take responsibility for mistakes, learn from their experience, and see self-improvement as a long-term process. So if you have an employee with internal LOC, you’ll have someone who is confident, proactive and in control, and who takes life by the proverbial horns, rather than being jostled aimlessly by life’s bumps and bruises.

The problem with LOC is that it can be a rather abstract concept, which makes interviewing for it complex. Fear not – we’ve got some examples of questions you can ask:

1)     Think back to a major academic disappointment and career disappointment. What were they, and why do you feel they were not successes?

2)     What are the top three reasons why you will succeed in this career? What, if anything, do you feel will hold you back from succeeding in this career?

4)     How do factors like intelligence and education play a role in success, in your opinion?

5)     What do you think are the main reasons why people don't live up to their full potential in their career?

If you’re interested in using LCAST (Locus of Control & Attribution Style Test) or other tests for HR purposes, request a free trial for ARCH Profile here.