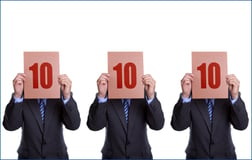 Here's a mission impossible: Try to find someone who has high self-esteem but who is also an extreme perfectionist. Chances are you won't. Why? Because even though people with high self-esteem will push themselves to do their best, they also accept that they are not infallible and that they will mess up along the way. So who is more likely to be an unhealthy perfectionist? According to a study we conducted, people with a poor self-image have a greater tendency of setting unreasonably high expectations for themselves – and for others.

According to the data we collected from our Perfectionism Test, people with low self-esteem tend to be harder on themselves and others than people with high self-esteem. Here are some of the highlights of that study.

Here’s what will surprise you, however. You may think that individuals with low self-esteem are so focused on their own shortcomings that they won’t notice the inadequacies of others (or won’t dare to point them out).

Our study shows otherwise. Along with setting the bar unreasonably high for themselves, people with low self-esteem also tend to extend some of their perfectionistic tendencies to other people.

Here’s what our study reveals:

It’s important to set at least some expectations for ourselves and for others, as long as they are reasonable. So if an employee puts in the bare minimum effort to get a project done and doesn’t bother to check over his/her work for mistakes (or consistently makes the same error, even though you’ve pointed it out several times), there’s nothing wrong with expecting (and asking for) better quality work.

If, however, you delegate one of your tasks to someone who has little experience in the area, you need to anticipate that there will be a learning curve, and that they may take a different route to completing the task. Wanting the task to be done your way and according to your standards without any errors is an unreasonable expectation.

Whether you set excessively high expectations for yourself or for others (or both), we offer the following tips:

Specific: Rather than simply stating “I want to improve my sales”, have a number in mind, for example “by 10% in 6 months.”


Measurable: Being able to track your progress at set intervals (every month, for example) is important - you’ll see and appreciate the fruit of your toil.


Attainable: This is the key to success. Goals that are too easy won’t motivate you; goals that are too hard will discourage you and are more likely to be left unfinished. Set a goal that is high, but within reach. Stretch targets may work in the short-term and in some circumstances, but chronic use of stretch targets lead to learned helplessness and burnout.


Relevant: Why are you setting this particular goal? Why do you want to achieve it? You’ll be much more motivated to achieve a goal that means something to you. Setting relevant goals will keep you motivated and focused.


Time-bound: Set a realistic deadline. This will keep your eyes on the prize. Setting a goal to be achieved at some vague time in the future is not going to stick. That being said, be willing to tweak your deadline if unexpected situations arise.
Break down your goals into smaller seps and create milestones for yourself. Achieving smaller goals will encourage you and keep you motivated, and make that one large goal seem more and more attainable.

Celebrate achievement of milestones.
Give yourself small rewards for reaching a small goal, and plan for a major reward after achieving your main goal.

Enlist the help of others to keep you on track. Find someone who has either achieved the goal you’re striving for, or someone who will simply be there to offer their emotional support.
If you’re interested in using tests for HR purposes, request a free trial for ARCH Profile here.