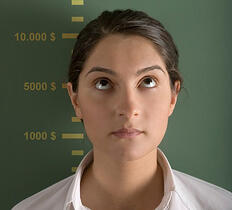 It’s been the theme of many books – the wealth mindset. What is it that allows a person to go from abject poverty to a 5-bathroom, 15-car garage mansion, for example, while another remains within his or her less fortunate circumstances?

When most people hear rags-to-riches stories, they appreciate the concept – maybe even glean some inspiration from it – but the idea of going from “just getting by” to “success beyond one’s wildest dreams” often falls under the category of “Things that will never happen to me.” So how does it happen?

We compared the personalities of people in different socio-economic brackets who took the SLPro (Success Likelihood Profile). What we discovered is that there are distinct personality differences between those in the $75,000+ salary range and those under $25,000 in six areas:

1)     Fear of success: People with this fear tend to walk away from opportunities. They are afraid of getting their hopes up; they worry that success will bring responsibilities and expectations that they won’t be able to handle. They also tend to believe that they don’t deserve success to begin with.

2)     Fear of the social consequences of success: The basis of this fear is the impact that personal success will have on loved ones. There is a fear of jealousy, of being ostracized or, on the contrary, becoming the center of attention.

3)     Fear of failure: This is a pretty straightforward fear, and is often tied into the belief of not being good enough (i.e. self-esteem, self-confidence, or the imposter syndrome). A fear of failure can be debilitating, holding a person back from taking risks, setting goals, and doing anything outside their comfort zone.

4)     Drive and ambition: This in the impetus that moves a person forward. A person who sets goals and puts the effort into achieving them increases their success potential exponentially.

5)     Self-esteem: The role that self-esteem plays in success is invaluable. Those who don’t believe in themselves are less likely to succeed, and even if they do get a taste of success, it is more likely to be short-lived because they feel they don’t deserve it.

It isn’t that people in a high salary ranges are above failure – they can and will fail. It’s just that they don’t let it dictate how their life will be experienced. These are people who keep their mindset focused on success, and who see failure as a lesson to be learned, not a self-fulfilling prophecy.

Even if they lose money or go through difficult financial times, there’s never that sense of “Am I ever going to get out of this rut?” They know that they’ll find a way to get back on top again. Clearly, mindset is a major factor in how your life plays out.

Here’s what else our comparison between rich and less fortunate adults reveals:

So how can you improve your likelihood for success? Do the following:

If you’re interested in using SLPro (Success Likelihood Profile) or other tests for HR purposes, request a free trial for ARCH Profile here.