Pick me! Signs an employee is ready to be promoted 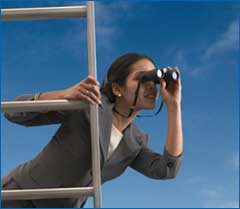 Very few people get in at the bottom floor of a company and immediately set their sights on the top, but companies typically assume that everybody is ambitious and ready to climb the corporate ladder. Some people, however, are sufficiently challenged in their current position, and have no desire to move up in the ranks. Others always have their eyes on the prize...or on that corner office with the personal assistant.

These are the people who always have the bigger picture in mind, and an underlying motivation behind their hard work. The question is, do they really know what they’re getting into when they ask for a promotion, and if they do, do they have the traits and skills needed to handle it? And how can you tell when the time is right?

Employees seeking a higher-level position, like supervisor or manager, need to fully understand what being promoted entails, however; they need to be prepared, or they risk being totally overwhelmed. Being promoted means being responsible for their own work as well as other people’s. It means dealing with employee grievances, firing unproductive employees, and making major decisions that could have a huge impact on the company.

This is what catches a lot of people off-guard. They think moving up the ladder means status and power – what they don’t anticipate is huge amount of stress and responsibility that comes with it. In essence, as an employer, you need to figure out who is ready for promotion, whether that person has what it takes to do the job both in terms of personality and skills, and what kind of training they need to be equipped to do an outstanding work. On top of that, you need to manage expectations of those who make the cut, and explain your choice to the ones who did not.

So what advice can you offer an employee who is just not ready yet? Here are some tips for employees who didn’t make the cut:

If you’re interested in using CADVP (Career Advancement Profile) or other tests for HR purposes, request a free trial for ARCH Profile here.