Locus Hocus Pocus – The power of an internal locus of control 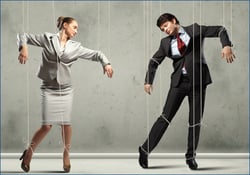 When shopping for a car, you don’t limit your criteria to “anything with wheels.” You want a vehicle that’s reliable, eco-friendly, and won’t leave you stranded in the middle of the road on a frigid night in December.

Similarly, when you’re looking to hire a new employee, you won’t limit your job advertisement to “If you can read this ad, you’re hired.” Most HR managers look for juicy traits like conscientiousness, patience, confidence, and perseverance. In fact, if you wanted to search online for interview questions that specifically assess these traits you’ll find plenty. There is one trait, however, that has a significant impact on professional success but isn’t well-known outside psychology circles. This hidden mental treasure is called “locus of control.”

Locus of control (LOC) is the degree to which a person believes that his or her actions can make a difference, whether it’s changing a bad habit or making a positive impact on the world as a whole. People with an external LOC tend to view themselves as being a passive if not hapless participant in life’s play. They don’t believe that they have the power to change their circumstances, and often feel like a victim of life’s ups and downs. People with an internal locus of control, on the other hand, take a more proactive approach to life. If they don’t like their circumstances, they take steps to change them.

Those with an external locus of control are more likely to develop an “us vs. them” attitude toward management.

After collecting data for our Locus of Control and Attribution Style Test, we divided people into two groups – those who have an external LOC and those with an internal LOC. Here’s what our research reveals:

When it comes to professional advancement, 88% of people with an external LOC believe that people can get a promotion simply because their boss likes them, compared to only 2% of internal LOC people.

Bottom line: People with internal LOC have the drive and confidence to succeed and take ownership of the goal.

74% of people with an external LOC believe that a person cannot rise above his or her background. If you had a difficult childhood, lacked positive role models or come from a low-income family, you are less likely to succeed. Only 1% of people with an internal LOC believe this. They refuse to allow themselves to be limited by their circumstances or to blame others for their misfortunes.

Bottom line: People with internal LOC feel in control of their lives – both at work and at home. They take responsibility for their success and failures and feel they have the power to change.

Compared to 16% of external locus people, 93% of those with an internal LOC believe that a person can change for the better through knowledge, practice, and perseverance. For internal LOC people, learning and self-improvement is a lifelong process.

Bottom line: This attitude has a direct impact on the person’s ability and willingness to learn, and thus translates into trainability (or lack thereof).

When people with an internal LOC fail, 98% of them assume it’s the result of a lack of effort – it’s just a matter of working harder next time around. Only 19% of those with an external LOC attribute errors or failures to a lack of effort, and are more likely to place the blame on factors outside their control. Moreover, a whopping 95% of the external group (vs. 6% of the internal group) believe that a person can fail at something simply because he or she is having a “bad day.”

Bottom line: An internal LOC is linked with mental hardiness and perseverance.

When people with an internal LOC succeed, 98% attribute their success to personal factors like intelligence and skills/abilities. For those with an external LOC, 96% attribute success to chance, luck, or destiny. In fact, 89% of them also believe that being at the right place at the right time is essential to attaining a goal or fulfilling a dream.

Bottom line: While an external locus of control may protect your self-esteem when it comes to failures (i.e. “I’m not bad at math … the exam was just too darn hard”), internal LOC feeds solid self-esteem by helping us accept praise for success and giving us control over our lives. Even the act of taking responsibility for errors and failures can improve our resilience, as long as we don’t attribute failure to stable internal factors (i.e. instead of saying: “I failed the exam because my brain just isn’t wired for math”, say “I may not be a math whiz, but I can do better next time if I join a study group.”

It’s difficult to find people who truly love their job, but this is less of a problem for people with an internal locus of control. In our study, 67% are satisfied with job, 26% are moderately satisfied, and 6% are dissatisfied. In contrast, only 12% of employees with an external LOC are satisfied with their job. Another 39% are moderately satisfied, while the remaining 49% are dissatisfied.

Bottom line: People with internal LOC perform better because they take it upon themselves to find something enjoyable in any task. Employees with high levels of job satisfaction are more productive, easier to get along with, dedicated to the success of the company, easier to manage, and evidently, less likely to quit.

Although locus of control may be an abstract concept, its impact on employee performance is undeniable. Like listening skills and emotional intelligence, it’s a characteristic that we only recognize as vital to a person’s success after the fact – as in, after the person underperforms, struggles to work with others, succumbs to the pressure of the job, or suddenly quits.

When life gets rough some people whine about the cruelty of fate. Others hang on for the ride and try to make the most of it. Which person would you rather have working for you?

If you’re interested in using Locus of Control and Attribution Style Test or other tests for HR purposes, request a free trial for ARCH Profile here.