Thinking like a winner – or a Jack Russell Terrier: The personality traits needed to achieve success 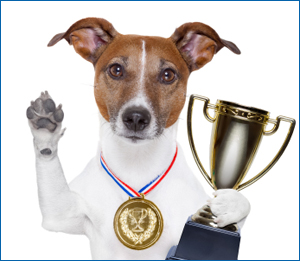 Small dogs don’t act like small dogs. They don’t even realize they’re small - and if anything, what they lack in size they make up for in attitude. “It’s not the size of the dog in the fight,” counseled Mark Twain, “it’s the size of the fight in the dog.”

So what pushes the unlikely underdog to oust a championship team? How do people manage to achieve seemingly insurmountable goals in spite of their naysayers? In essence, what is the personality make-up of a winner? Is it just stubbornness?

Research we conducted using the Goal-Setting Skills Assessment (GSSA) revealed that people who consider themselves a success were more likely to have a strong sense of self-efficacy and an internal locus of control (i.e. they believe that their success is due to their own efforts, rather than external, uncontrollable forces, such as luck or being at the right place at the right time). In fact, when comparing high goal-achievers to low goal-achievers, here’s what we discovered:

Age differences reveal that people below the age of 18 seemed to be more proactive when striving to achieve an objective, using techniques such as regularly evaluating the progress of their goal, motivating themselves, and breaking large goals into smaller, achievable steps. Young goal-setters were also more likely to reward themselves after reaching a goal.

It isn’t that those who succeed at achieving their goals are more skilled or have better privileges and opportunities. The difference is, those who want to accomplish something will “think” success – they believe in themselves, they refuse to let anything hold them back, and they make concrete plans to get where they want to be. They aren’t afraid to take destiny by the hand and say, “This is what I want. Now what can I do to make this happen?” On the other hand, those who doubt themselves will protect their ego by putting the bar too low or not setting clear goals at all. They visualize problems, rather than success, and this frame of mind affects their thinking patterns, their emotions, and their behavior. It’s hard to succeed when you expect failure.”

Here are some goal-setting tips:

If you’re interested in using GSSA (Goal-Setting Skills Assessment) or other tests for HR purposes, request a free trial for ARCH Profile here.