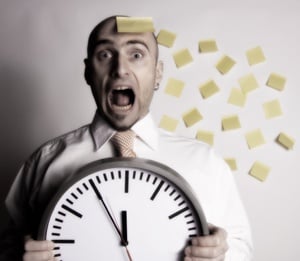 Some sources of stress are rather obvious: Tight deadlines, impatient customers, or large workloads. But what about unclear team roles, too much routine, or not having enough work to do? There are many factors at work than can be a source of stress - and they may not be as apparent as many managers may think.

There are ten main stressors that can decrease morale, job satisfaction, and engagement and as a consequence, increase the likelihood for burnout:

Having to work on unpleasant or redundant tasks can be a major stressor. So is unrealistic workload. Sometimes, however, it’s not so much the type or amount of work that stresses out employees. A factor that management often overlooks is a lack of sufficient resources to complete a task. For example:

In addition, a lack of skills (or the development of bad habits) on the part of employees can limit their ability to deal with a tough workload, which adds to their pressure. These include:

Teamwork requires a group of people with different personalities and varying work approaches and ideas to work together in harmony – not an easy feat. Common teamwork stressors include:

It’s inevitable: A group of different people working together will lead to the occasional conflict. Even working with the public on a regular basis has its pitfalls. Common relational issues that can cause stress include:

Stability offers a sense of control over one’s present and future – and control offers a sense of security. In uncertain economic times (which is pretty much all the time), unfamiliar and unexpected changes can really rock the boat. Common stressors related to change include:

It can be rather terrifying, if not disconcerting to be aboard a ship or airplane where the captain has no idea where he’s going. When a team leader or company head has no idea where the organization is headed, this can make subordinates extremely uneasy. Common stressors of this nature that can leave employees scrambling include:

Stay tuned in to the next blog where we will cover the remaining five sources of work stress, as well as the rest of our stress series.